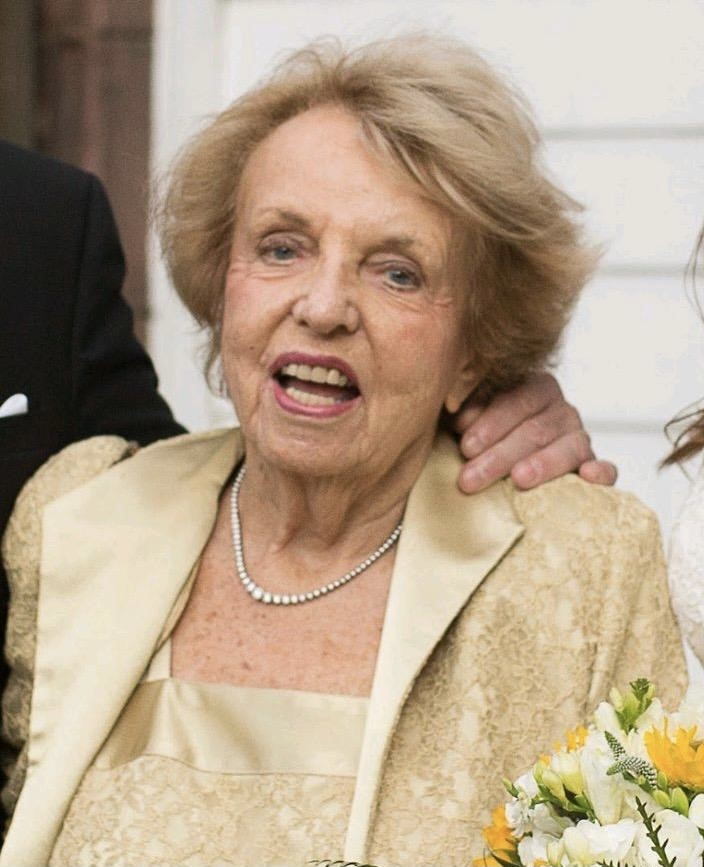 Please share a memory of Elizabeth to include in a keepsake book for family and friends.
View Tribute Book

Words defy her family to describe the loss of Elizabeth Murphy Durkin, matriarch and mainstay, who passed away on December 3.

More than fifty years resident in Essex Fells, N.J., Betty had also lived in Livingston and regularly wintered in Wellington, Florida before ending her days in Spring Lake. But she forever described herself as a “Kearny girl.”

Born in Kearny, NJ in 1925, Betty was the daughter of Edward and Elizabeth King Murphy, and soon became the elder sister and dearest friend of Doris. She excelled through St. Cecilia’s grammar and high schools and won an academic scholarship to the College of St. Elizabeth. In 1949, following her wholly-enraptured heart and the custom of the day, she left her studies to marry Thomas E. Durkin, Jr. Betty went to work as a secretary, first to put Tom through the Fordham School of Law and then to serve as sole support staff in his fledgling law practice, where the boss addressed her strictly as “Miss Murphy” until she became pregnant with the first of their seven children and handed in her notice. Betty then proceeded to show the world how to bear children without boring anyone. As if weaving nonstop from the day she married until the day she died, she produced not just a large family, but an enormous family life, as full of love, complexity and color as she was.

Not that family was the only thread she ever had a hold of. Betty was a founding member of the parish of Our Lady of the Blessed Sacrament in Roseland and served as first president of the school’s PTA. In 1980, around the time her first grandchild rebranded her “Booper” once and for all, Betty graduated magna cum laude from Caldwell College with a concentration in Irish history and soon became the college’s director of development. Then, approaching age 60, she opened an Irish import store called The Thatched Cottage, the thriving of which prompted moves from Upper Montclair to Verona to Caldwell. In 1985, the Brian Boru Association named Betty Irishwoman of the Year. In 2008, along with her husband Tom, she was honored for a lifetime of charitable works by St. Vincent’s Academy. It was in 1994 that Betty received the Veritas Award from Caldwell College for exemplifying the ideals of Catholic womanhood, but she spent her whole life deserving it.

In the end, however, Booper is captured – truly captured – by none of the above. She loved the scent and roar of the ocean; hot dogs slathered in sauerkraut, and serious, challenging works of literature and history that interested nobody else in book club. She loved God and especially His blessed mother. She loved roller coasters, car trips, hand-made Halloween costumes, artificial hair colors and real Christmas trees. She loved the Democratic party, the state of New Jersey, and the fact that she had once ridden a camel in Australia. She loved her dogs, her Jaguar, and Jeopardy. Less than two weeks before she died, she loved being wheeled right onto a festive trolley to head to her 96th birthday bash, for to understate immeasurably, Booper loved a party. And her love for all these things infused and enlivened her love for her family, which subsumed and sustained all the rest.

Visitation will take place at St. Aloysius Church, 219 Bloomfield Avenue, Caldwell, N.J., from 7:15 to 9 p.m. on Thursday, December 9 and from 9 to 10 a.m. on Friday, December 10. A Mass of Christian Burial will immediately follow. Interment is in Gate of Heaven Cemetery, East Hanover, N.J. Arrangements are by Hugh M. Moriarty Funeral Home, 76 Park St., Montclair, N.J.

In lieu of flowers, donations in Betty's honor may be sent to the Center for Autism and Applied Behavior Analysis at Caldwell University, 120 Bloomfield Ave., Caldwell, N.J. 07006

To send flowers to the family or plant a tree in memory of Elizabeth Durkin, please visit Tribute Store
Thursday
9
December

Share Your Memory of
Elizabeth
Upload Your Memory View All Memories
Be the first to upload a memory!
Share A Memory
Send Flowers
Plant a Tree