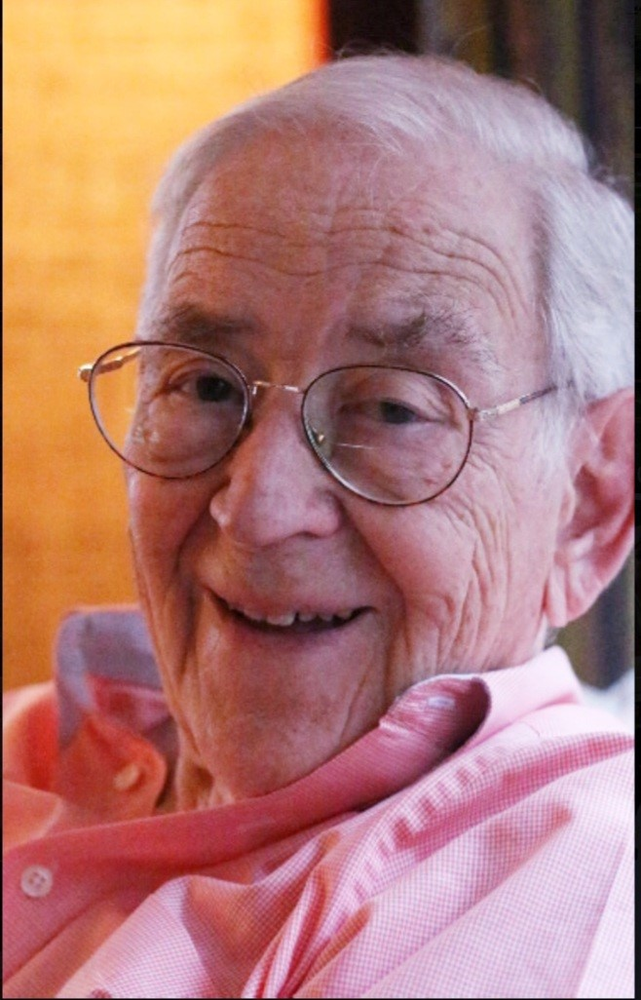 Obituary of Harris I Cohen

Please share a memory of Harris to include in a keepsake book for family and friends.
View Tribute Book

Harris Cohen, 95, of Upper Montclair, passed away peacefully in the company of his beloved wife, Renée, and youngest daughter, Julie.

The son of Mary and Bernard Cohen, Harris was born and raised in Boston—a point of pride that was evidenced in his enduring Boston accent and his long-suffering love affair with the Boston Red Sox. A precocious child with a head full of red hair, Harris was known to get in a row or two with his older brother Joel but always feigned innocence. Due to his high-spiritedness, and family financial and health issues, Harris skipped two grades during his schooling resulting in graduation from Boston Latin School at the age of 15.

Escaping high school, Harris graduated into a world on the cusp of WWII. He began his college education studying business at Boston University, but soon joined the U.S. Navy to do his part. He was transferred first to Harvard College for the V-12 program, then Midshipmen's School at Columbia University where the youthful sailor was ordered to shave daily "whether he needed to or not" before becoming an Ensign in 1944. From 1945-1946, "Ensign Benson" served in the Pacific Theater on board the U.S.S. Topeka CL-67. After completing his tour of duty he returned to Harvard to finish his A.B. degree and sharpen up his squash game. To complete his education, he earned an M.B.A. at the University of Michigan and developed a case of Wolverine fever (Go Blue!), which also afflicted his youngest and her children.

The call of the business world and the excitement of city life lured Harris to Manhattan, where he led the quintessential, sharped-dressed bachelor life of the late 1950s managing to live just beyond his means. The NYC skyline inspired him to try his hand at painting, a hobby he would revisit on and off throughout his life. Being an ardent sports fan, he scored NY Giants season tickets when they were still playing at the old Polo Grounds and later launched a Super Bowl party tradition that lasted for many years. One day a couple of friends came up with the happy idea of fixing Harris up with a beautiful raven-haired nurse named Renée. They married in 1961 and kept “renewing the contract” for nearly 60 years.

Soon the kids started coming, first Linda, then David, and with Julie on the way it was time to move to the suburbs. The family took up residence in Upper Montclair, NJ, the town Harris called home for the rest of his life.

After a career in the linen business, he eventually became President and Chairman of Greyhound Temporary Personnel and later, an M&A Consultant to the Temporary Help Industry. More importantly to him, Harris began to volunteer around town and serve on non-profit boards for many causes he cared deeply about. He served at various times on the boards of HomeCorp, Montclair Counseling Center, United Way North Essex, West Essex Rehabilitation Center, Montclair Red Cross, Senior Care and Activities Center, and Green Hill. Always one to support the interests of others, Harris served as a behind-the-scenes support and champion of Renee’s volunteer activities with the Montclair Volunteer Ambulance unit. His service and stewardship helped build new facilities and bring comfort and care to countless seniors.

He indulged in a few hobbies to express his creativity and love of collecting. He enjoyed Ikebana-inspired dried flower arranging, polishing stones, collecting (from Sanibel Island, FL, a favorite travel spot of his) and displaying seashells, cacti, fossils, and minerals. He loved posting photos of Renée's orchids on Facebook and counting all the comments, and together they joined the Ramapo and North Jersey Orchid Society's. He was an avid reader, dedicated crossword puzzler, and had a head for cards, especially cribbage and bridge. He also loved tennis and was notorious on the court for his wicked backspin. He and Renee traveled throughout the U.S. and made several memorable trips abroad to Africa, Chile, and Europe.

Family and friendships, however, were truly his lifeline. He was an adoring husband, a doting father, father in-law, and grandfather. When his kids were little, he painted their portraits and then when the grandchildren came along, he dusted off the easel and painted their portraits too. He loved showing off his family's accomplishments and cherished the opportunity to visit his grandkids' elementary school to share presentations about his fossils and minerals and was an annual guest at their Veteran’s Day celebrations.

In later years he was never far from his iPhone and became a worthy Words with Friends competitor. He and Renée took daily walks where he would proudly adorn his signature hat, the one with U.S.S. Topeka embroidered in gold thread. He didn't mind one bit if a stranger asked about his service.

At every stage of life, in every activity he pursued, he had a knack for making new friends and loved spending time with people of all ages, especially if a nosh was involved. Harris never shied away from sharing a story, a joke, his wise counsel, or his strong opinion. He will be remembered fondly as a man of warmth and integrity, dedicated to family, friends, country and community. He lived a happy life, full of good humor and love.

The family plans to arrange a Celebration of Life service at a later date. In lieu of flowers, the family requests that donations be made to the Wounded Warrior Project or any of the local organizations mentioned above.

To plant a beautiful memorial tree in memory of Harris Cohen, please visit our Tree Store

A Memorial Tree was planted for Harris
We are deeply sorry for your loss ~ the staff at Hugh M. Moriarty Funeral Home
Join in honoring their life - plant a memorial tree
Online Memory & Photo Sharing Event
Online Event
About this Event

Look inside to read what others have shared
Family and friends are coming together online to create a special keepsake. Every memory left on the online obituary will be automatically included in this book.
View Tribute Book
Services for Harris Cohen
There are no events scheduled. You can still show your support by planting a tree in memory of Harris Cohen.
Plant a tree in memory of Harris

Share Your Memory of
Harris
Upload Your Memory View All Memories
Be the first to upload a memory!
Share A Memory
Plant a Tree