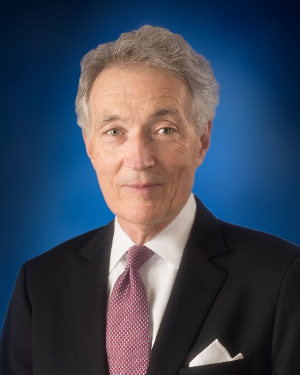 Please share a memory of William to include in a keepsake book for family and friends.
View Tribute Book

William H. Connolly Jr. passed away at his home in Montclair on February 26, 2021, after a valiant battle against cancer. He was 74 years old. He will be remembered for his warmth and good humor, patience, dedication, honesty, and tenacity. Bill’s rule was “Be good, work hard, have fun,” and he inspired others to do just that.

Bill is survived by his loving wife of 43 years, Melinda (Sharkey) Connolly; their three children, Kristen Connolly (Stephen O’Reilly), James Connolly (Elyse Moody), and Will Connolly; and two grandchildren, Aidan and Anna O’Reilly. He is also survived by his sisters, Noreen and Mary Connolly, and many nephews and nieces. He is preceded in death by his parents, William H. Connolly Sr. and Dolores (Rachel) Connolly; his brother, James F. Connolly; and his infant son, William Robert Connolly.

Bill was a lifelong resident of Montclair and member of Saint Cassian Catholic Church. He was a graduate of Saint Peter’s Preparatory School, in Jersey City, and Fairfield University, in Fairfield, Conn., and served in the Army National Guard from 1967 to 1973. In 1969, after finishing college, he joined the insurance and risk management brokerage firm that his father had founded in 1950, William H. Connolly & Co. He became president and CEO in 1983, and continued in that role until his death. He led a dedicated team of professionals providing property and casualty insurance products and risk management services to a wide variety of businesses, health care organizations and hospital systems, educational institutions, service sector firms, not-for-profit and social service agencies, and families. He served on the Governor’s Panel on Malpractice Insurance for the Commissioner of Banking and Insurance in 2013.

Bill’s first priority and foremost love and joy was always his family. He took great pride in their every accomplishment, telling them, “Always stand in your power...believe in yourself. Push yourself and always be the very best you can be in every way. Maintain discipline. Take smart risks. Life is for living, and living well brings you and others joy.”

But his other family—his coworkers and colleagues past and present—came in a very close second. Every success was a shared success, and every heartache was Bill’s as well. He loved his work family, and felt blessed to collaborate and grow with them for so many wonderful years.

Bill also cherished his rugby family. His 20-year career began when he joined the Fairfield University Rugby Football Club as a freshman, in 1966. He played all four years, serving as club president his senior year. In 1970, Bill cofounded Essex

Rugby Football Club, and was a fixture on the field until his retirement in 1977. He continued on as a coach of Essex RFC, the New York Metropolitan Rugby Club

Select Side, the Eastern Rugby Union, and, in 1980, as an assistant coach for the United States Eagles national team. In 2013, Bill cochaired the fiftieth anniversary celebration of the Fairfield University Rugby Club, and was inducted into the Fairfield University Athletic Hall of Fame. He had been a main supporter of the nonprofit charitable organization Friends of Fairfield Rugby since its inception in 2008.

Through his company and personally, Bill was actively engaged with many community organizations. He was chairman of the United Healthcare Foundation. He served on the development committee of Caldwell University, in Caldwell. Since 1987, he had been a trustee of St. Benedict’s Preparatory School, in Newark, and only recently stepped down as its board chairman. In addition, Bill was a trustee of Fairfield University and of the Montclair Golf Club.

The Connolly family would like to thank all of Bill’s friends and associates who thought and prayed; called; sent cards, videos, and messages of support; and made Bill and all of us smile during these difficult months. We would also like to thank the compassionate caregivers we were so lucky to get to know, and the doctors and nurses at Hackensack University Medical Center’s John Theurer Cancer Center who cared for Bill so well.

Visitation will be held on Monday, March 1, from 4 to 8 p.m. at Hugh M. Moriarty Funeral Home at 76 Park Street in Montclair (moriartyfuneralhome.com). A Mass of Christian Burial will be held on March 2 at 10:30 a.m. at Saint Cassian Catholic Church at 187 Bellevue Avenue in Montclair; because seating is limited due to Covid, it will also be available to watch via live stream at https://stcassianchurchuppermontclair.org/ (click “Watch Now” under the “Quick Links” heading). A notice of a future memorial celebration of Bill’s life will be announced.

In lieu of flowers, donations can be made to St. Benedict’s Preparatory School, 520 Dr. Martin Luther King Jr. Blvd., Newark, NJ 07102, or to Friends of Fairfield Rugby, 536 Surrey Lane, Fairfield, CT 06824 or friendsoffairfieldrugby.org

To send flowers to the family or plant a tree in memory of William Connolly, please visit Tribute Store
Monday
1
March

Share Your Memory of
William
Upload Your Memory View All Memories
Be the first to upload a memory!
Share A Memory
Send Flowers
Plant a Tree