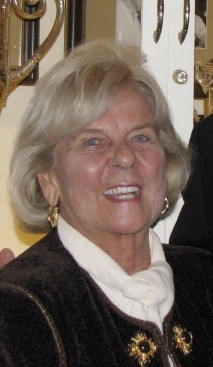 Please share a memory of Suzanne to include in a keepsake book for family and friends.
View Tribute Book

Suzanne Seibert Williams, age 85 of Montclair NJ, passed away peacefully at Green Hill, West Orange, NJ, on May 18, 2020. A daughter of the late Dorothy Crock Seibert and James Holderbaum Seibert, Sue was born in Somerset, Pa and raised in New Jersey. She graduated from Somerville High School in 1952 and attended The College of New Jersey. Sue was the wife of the late Richard L. Williams, whom she supported with love and dedication as his blossoming career took him across much of the United States. Sue never bristled when being told of yet another move which meant leaving good friends behind. Sue and Dick eventually settled in Montclair, NJ where they spent the past 38 years and made many friends. Her summers were spent in Bay Head, NJ. Sue was a member of the Montclair Golf Club and the Bay Head Yacht Club. She was a long time member of the Garden Club of Montclair and a volunteer at the Montclair Art Museum. Sue was the life of any gathering and could stay up chatting to the wee hours in the morning. She always asked questions, engaged in lively discussion, and was one to offer an opinion on more than one occasion. Sue adored her grandchildren, and they adored her: Dickie Redmond (Ilana), Scott Redmond (Katie), TJ Redmond, Richard Williams III, Drew Williams, Caroline Williams, Will Redmond, and Scott Williams. In addition to her parents and husband, Sue is predeceased by her brother, James Seibert, and her grandson, Will Redmond. Sue is survived by her daughter, Jane Redmond (Rick) of Hobe Sound, FL and her son Richard Williams Jr (Jody) of Atlanta, GA. In addition, she is survived by her sister, JoAnn Revie, and brothers Tom, John, and Dick Seibert. A private burial in the family cemetery plot will take place Tuesday, June 2nd at the South Branch Reformed Church in Hillsborough Township, NJ. A celebration of Sue’s life will take place at a later date. In lieu of flowers, memorial contributions may be sent to The Garden Club of Montclair, Inc. 60 S. Fullerton Ave, Montclair, NJ 07042 or Central Presbyterian Church Memorial Fund 46 Park St, Montclair NJ 07042

Share Your Memory of
Suzanne
Upload Your Memory View All Memories
Be the first to upload a memory!
Share A Memory