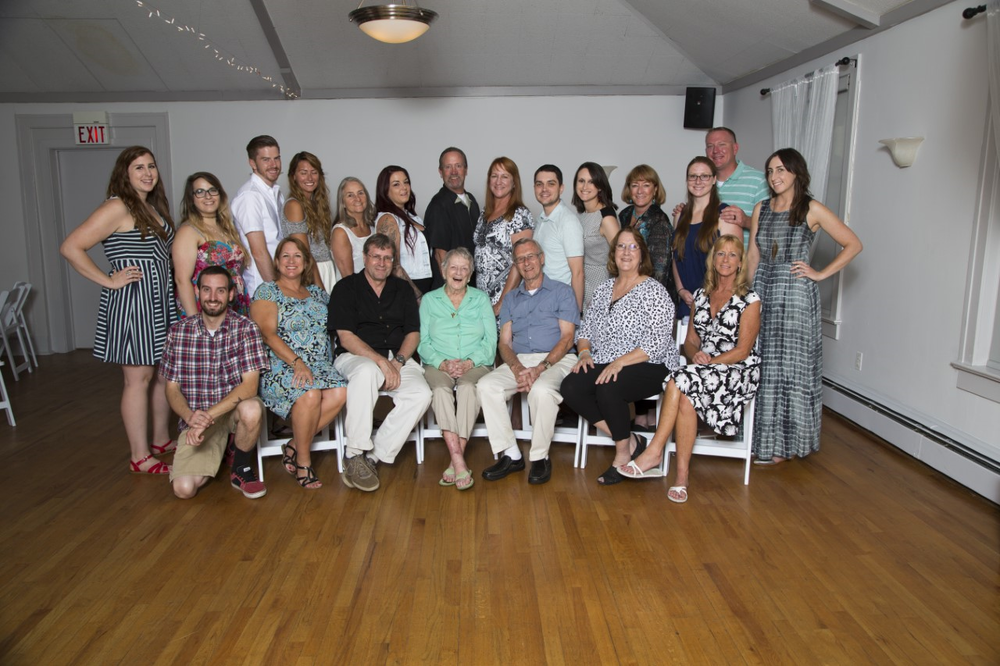 Please share a memory of Mary to include in a keepsake book for family and friends.
View Tribute Book

Mary B. Anderson was, in the parlance of pippitude, a pip. Born 92 years ago in her home at 14 Waterbury Road, Upper Montclair, NJ, she was given the nickname of “Treasure” as a little girl, and by all accounts, was well worthy of the sobriquet. She attended nearby Lacordaire Academy through high school before earning degrees in biology and chemistry at the College of New Rochelle. Later in life, she added degrees in Special Education and Library Science.

She met fellow Montclair native and big band music enthusiast Jack Anderson, and, despite religious differences, they were married at the Marlboro Inn in 1950. Jack agreed to raise any issue as Catholic, and, seemingly to prove his commitment to the cause, produced six children in nine years. A new house was built on Glenfield Road, in the shadow of Brookdale Park, and, after an uncharacteristic gap, the family was made complete with the arrival of Eileen, and we were seven.

Children were everywhere in those days, and we all had lots of friends in the neighborhood (especially the McDermotts), at school, scouts and CYO day camp. Your friends became Mary’s friends, and she treated everyone as her own. There were lots of cousins around in those days as well-Andersons (before they moved to Pennsylvania), the Boyces and the Perrys, with whom we vacationed at the Jersey Shore with Grandpa Frank and Nana Rose for several years.

Life was a kaleidoscope of Catholic school, with the ironically named Sisters of Charity, “educational” trips to Gettysburg, Sleepy Hollow, Mystic Seaport, Grover Cleveland’s House (!) and, of course, the precious two weeks in Bay Head, then Lavalette every summer. Once the kids had progressed through their various schools, Mary started to travel in earnest, globetrotting, often with a daughter or two in tow (having a boy along would have meant an extra hotel room). As kids moved away, she returned to teaching and became a substitute teacher and then a Special Ed teacher for schools in Bloomfield. In 1983, she became the librarian at Mt. St. Dominic Academy.

In 1989, she lost her son David to circumstances she didn’t fully understand and she stood by him through the day of his death in her home. By then, her children had evenly split between the west coast near Santa Cruz, and the east coast in New Jersey. Mary enjoyed the reunions that took place for her 70th birthday on Cape Cod, and her 80th in Bradley Beach, where she got to catch up with seldom seen relatives and friends. She had many lifelong friends and she cherished those relationships throughout her life. Even in the throes of her late life dementia, she still kept her weekly lunch date at the Town Pub with Mary Claire.

As anyone who has met Mary will attest, she was sharp, witty and strong-willed. She had an abiding curiosity and loved conversing with anyone at anytime, never failing to listen with interest and enthusiasm. She loved Montclair, the Jersey shore, St. Cassian’s, Holsten’s, fireworks in Brookdale Park and she was always up for dancing to good music. She had her share of health issues, especially over the last couple of years and happily, she is now at peace. The family especially wants to thank her caregivers over that time, Marshallah and the Atlantic Health Hospice people, notably Nicole, who helped Mary immeasurably over her final journey.

Our cousin, Jim Anderson sent along this tribute, which pretty much sums up Mary for many of us: “I like to think that everything I know about cool, calm and collected, I learned from her!”

There is no service information at this time, due to the pandemic. Please go to the Tribute page here: https://moriartyfuneralhome.com/tribute/details/611/Mary-Anderson/condolences.html#content-start if you would like to leave a memory of Mary. In lieu of flowers, we ask that you consider a donation to the Atlantic Health System Caregiver Fund: https://www.atlantichealth.org/patients-visitors/donate-volunteer.html

To plant a beautiful memorial tree in memory of Mary Anderson, please visit our Tree Store

A Memorial Tree was planted for Mary
We are deeply sorry for your loss ~ the staff at Hugh M. Moriarty Funeral Home
Join in honoring their life - plant a memorial tree
Online Memory & Photo Sharing Event
Online Event
About this Event

Look inside to read what others have shared
Family and friends are coming together online to create a special keepsake. Every memory left on the online obituary will be automatically included in this book.
View Tribute Book
Services for Mary Anderson
There are no events scheduled. You can still show your support by planting a tree in memory of Mary Anderson.
Plant a tree in memory of Mary

Share Your Memory of
Mary
Upload Your Memory View All Memories
Be the first to upload a memory!
Share A Memory
Plant a Tree