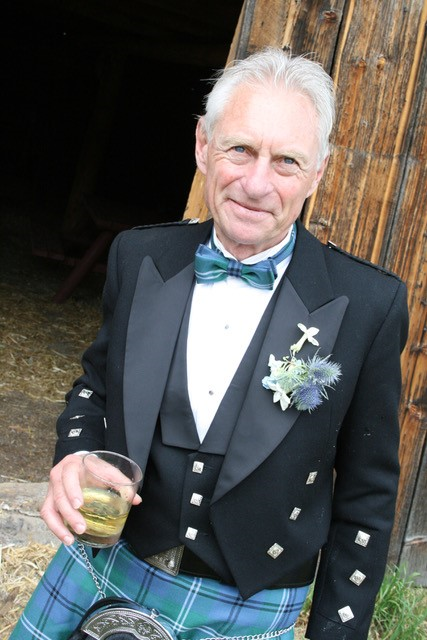 Please share a memory of James to include in a keepsake book for family and friends.
View Tribute Book

James “Tim” B.F. Oliphant, Watergate Prosecutor & High Mountain Lawyer, Dies at 81 Tim Oliphant, 81, passed away on March 30th in Montclair, NJ after bravely battling Parkinson’s disease. In 1938, Tim was born in New York, NY to Sarita Fajardo and George Booth Oliphant. He was raised in Upper Montclair, NJ where he overcame childhood polio, leaving him with a fused back and only two working vertebrae. Neverletting his ailment define him, he became well known for his life of action, adventure, and athletic grit. Tim graduated top of his class from The Choate School (’57) and Williams College (’61), where he excelled as a Spanish major. While spending his junior year abroad at the University of Madrid, he tried his hand as a stuntman and was cast as one of the Bandits of Barabbas in Nicholas Ray’s King of Kings. He then attended the University of Colorado Law School (‘66) where he earned his JD and (even more importantly) became a lifelong CU Buff fan. Following law school, Tim moved to Lima, Peru with Grace & Company but returned to the US when hired as an assistant prosecutor to Attorney General John Mitchell. Subsequently Tim moved to St. Thomas, V.I., where he was chief counsel for the Joint Narcotics Strike Force of the Virgin Islands. It was in St. Thomas where he met his first wife and the mother of his children, Elizabeth Devoll. Tim adored The Islands and may never have left had it not been for a 1974 call to become a special prosecutor with the U.S. House Judiciary Committee. Here, Tim investigated President Nixon and the Watergate scandal. After Nixon resigned, Tim went to work as an attorney for the House Select Committee investigating the activities of the FBI and CIA. In 1977, he was tapped to head up Pennsylvania’s RICO division, but with his first child and aspirations of starting his own firm, he made tracks for a small western ski town in Colorado. When Tim moved to Steamboat Springs, CO, it was a true cowboy town with only one stoplight. Nestled in the Yampa Valley at the heart of the Rockies, Steamboat appealed to his sense of adventure and possibility. Tim quickly began a 30-plus year career specializing in criminal law. His firms were arguably the best on the western slope and conceivably all of Colorado. He was featured in High Times magazine as a Top 30 defense attorney and was widely renowned for his quick wit and excellent litigating skills both in and out of the courtroom. Tim’s success as a criminal defense attorney earned him a Martindale-Hubbell AV Preeminent Peer Review Rating. Outside of the office, he was often spotted driving his 1978 Toyota Land Cruiser (“The Cruncher”) or riding around from town to town in Vice President Hubert Humphrey’s former limo, which proudly displayed the license plate “Acquit.” Tim’s storytelling, love of language, and razor-sharp mind all added to his magnetic personality. He owned every room he ever entered. Tim is survived by son George (Zoe) Oliphant, daughter Sarah (Jase) Wagner, step-daughters Adriana (Nick) Hidalgo and Alexandra Uriarte A celebration of life will be held in Upper Montclair, NJ and Steamboat Springs, CO as soon as family and friends are able to safely congregate. In lieu of flowers please consider making a donation to Doctors Without Borders.

To plant a beautiful memorial tree in memory of James Oliphant, please visit our Tree Store

A Memorial Tree was planted for James
We are deeply sorry for your loss ~ the staff at Hugh M. Moriarty Funeral Home
Join in honoring their life - plant a memorial tree
Online Memory & Photo Sharing Event
Online Event
About this Event

Look inside to read what others have shared
Family and friends are coming together online to create a special keepsake. Every memory left on the online obituary will be automatically included in this book.
View Tribute Book
Services for James Oliphant
There are no events scheduled. You can still show your support by planting a tree in memory of James Oliphant.
Plant a tree in memory of James

Share Your Memory of
James
Upload Your Memory View All Memories
Be the first to upload a memory!
Share A Memory
Plant a Tree