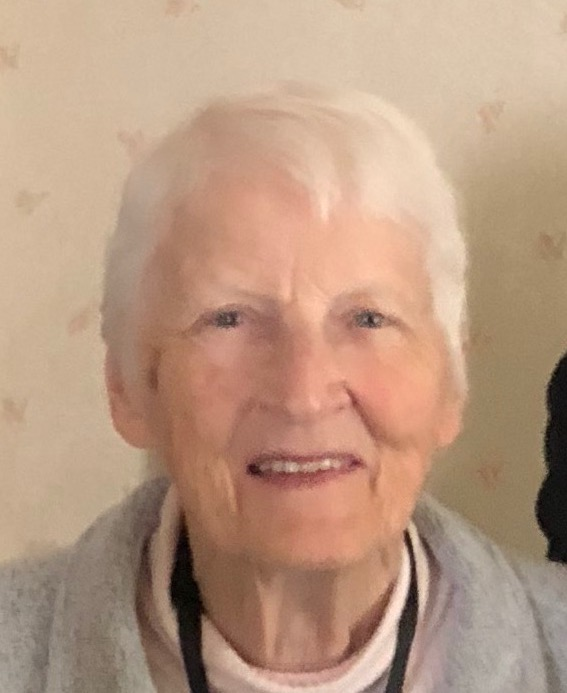 Please share a memory of Catherine to include in a keepsake book for family and friends.
View Tribute Book

Catherine “Kitty” Mulroe passed away on February 8th, 3 weeks shy of her 90th birthday. Born on a farm in Co. Mayo, Ireland the 2nd of 11 children she grew up helping her parents and grandparents to tend cattle, fetch well water, foot turf and raise her 7 rambunctious younger brothers. After emigrating at age 19 to the U.S. with her husband Peter, she was raising 6 children in Cedar Grove when the call of the old country caused them to pull up stakes and return to the British Isles aboard the HMS Queen Elizabeth. Arriving in England, Kitty, Peter and the 6 children were welcomed into the home of Kitty’s sister Mamie, brother-in-law Vic and their 3 children. However the challenges of the 4 adults and 9 children sharing a house tiny by American standards along with living through the most severe winter experienced in England and Ireland in 100 years caused her Peter to rethink the move. After decamping England for a holiday in County Mayo Kitty, Peter and family were once again crossing the Atlantic Ocean – this time on the S.S. United States. While her 6 children remembered it as one great adventure, filling them with stories for a lifetime, Kitty was burdened with starting life anew in Montclair with few resources, limited job prospects and a 7th child on the way. Drawing on her strong Catholic faith and her stoic nature she raised (and more than occasionally herded) her 7 (and soon to be 8) children while husband Peter gutted and rebuilt the home they were living in while simultaneously holding down a full time job. When later in life she had the opportunity for leisure she enjoyed traveling, whether back home to Ireland or with friends on organized trips. Memorable destinations were Nova Scotia, Germany, Rome, Medugorje, Lourdes and the Holy Land.

Known as “Nana” to her many grandchildren she would often fix them milkshakes, deviled eggs or her famous “Nana bread”. Her back door was always open to her offsprings’ friends who would come and go as if the house were their own.

Fiercely proud of her Irish Catholic faith and heritage she was a parishioner at Our Lady of the Lake Church in Verona and prior to that Immaculate Conception Church in Montclair. She was a member of the Rosary Altar Society and the Catholic Daughters of America.

Visitation at the funeral home will be Sunday February 16 from 1-5PM followed by a Mass of Christian burial at 10:30AM on Monday February 17 at St. Teresa of Calcutta Parish, Church of the Immaculate Conception.

In lieu of flowers donations may be made to Maryknoll Fathers and Brothers, PO Box 302, Maryknoll, NY 10545

Share Your Memory of
Catherine
Upload Your Memory View All Memories
Be the first to upload a memory!
Share A Memory