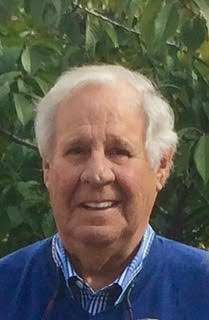 He graduated from the Loomis School in 1959, Lafayette College in 1963 and Columbia Business School in 1965. He served as Captain in the U.S. Army, stationed in Germany. Lee began his career at Lehman Brothers in 1968, and owned and operated Elmco Distributors and Elm Manufacturers.

In 1963, Lee married Brenda Landrum of Hobbs, N.M. During his very active life, Lee co-founded the Montclair Hockey Program, served as President and Trustee of the Montclair Golf Club, and served on the board of the Mannington Mills Company for 35 years. He and Brenda enjoyed seasonal stays at Skytop, P.A. and Santa Fe, N.M.

A memorial service will be held Friday, May 10 at 11AM at St. Peter's Episcopal Church at 271 Roseland Ave., Essex Fells, N.J.

To send flowers to the family or plant a tree in memory of Hartley Bingham, please visit Tribute Store
Friday
10
May

Share Your Memory of
Hartley
Upload Your Memory View All Memories
Be the first to upload a memory!
Share A Memory
Send Flowers
Plant a Tree