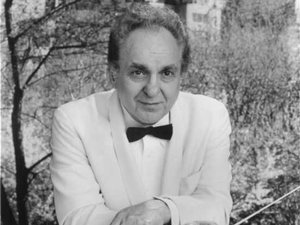 Please share a memory of Vincent to include in a keepsake book for family and friends.
View Tribute Book

Distinguished American conductor Vincent La Selva died on October 9, 2017 at the age of 88 in Cleveland.  The cause was complications from dementia.

Maestro La Selva was the founder of New York Grand Opera in 1973, which for 39 years offered fully-staged opera productions free to the public, most of the productions in Central Park. Since the opening performance May 23, 1973 of La bohème, Maestro La Selva led 55 operas in upwards of 350 performances. Over the years, these performances were attended by more than three million people. In 2001 Mr. La Selva finished an unprecedented eight-year cycle of the complete Verdi operas—all twenty-eight of them—performed in chronological order with a special performance of Verdi’s Requiem at Carnegie Hall. He continued to perform Verdi and Puccini operas in Central Park until 2012 and symphonic concerts at Carnegie Hall and at the Church of St. Paul and St. Andrew in New York City.

In addition to his opera performances, Maestro La Selva earned special renown for conducting symphonic scores with directness, lyricism, and great passion. The noted critic B.H. Haggin praised La Selva in the following manner:  “It is clear that he has what Bernard Shaw has called the highest faculty of a conductor, the magnetic influence under which an orchestra becomes as amenable to the baton as a pianoforte to the fingers… and not only in orchestra but singers.”  He led acclaimed performances with the New Jersey Symphony, the Juilliard Symphony, the Brno State Philharmonic in the Czech Republic, the Bern Symphony in Switzerland, the Symphony of the Air (formerly the NBC Symphony,) and he was Music Director of the Greater Trenton Symphony Orchestra.  Among his collaborators were such soloists as Leonard Rose, Ruggiero Ricci, Zinka Milanov, Rudolf Firkusny, Murray Perahia, Renata Tebaldi, Franco Corelli, and Peter Serkin.

He is survived by three children, Lisa La Selva Zayac, Maria La Selva Vogt, and John La Selva, a brother Roger La Selva, a sister Mary Kruzel, eight grandchildren and one great-grandchild, as well as Akemi Baba, a companion since the death in 2011 of his wife Helen “Danny” Lovell La Selva, to whom he was married for 51 years.

Vincent la Selva was born September 17, 1929 in Cleveland, Ohio, and began performing as a trumpeter at the age of eight and by the age of 12, he was conducting student performances. He received his bachelor's degree from the Juilliard School. He studied conducting with Jean Paul Morel, music composition Peter Mennin, Vittorio Giannini, and Vincent Persichetti, and trumpet with William Vacchiano, The composer Robert Ward taught him orchestration.

After his graduation from Juilliard, he served in the United States Army and conducted the First Army Band at Fort Jay on Governor’s Island. It was in 1954 that he founded the Xavier Symphony Society, made up of volunteer performers, which formed the kernel of his idea for presenting free productions. One of his early successes was Gian-Carlo Menotti’s The Saint of Bleecker Street, which the composer urged Maestro La Selva to bring to New York City Opera. La Selva’s successful production of the Menotti masterpiece led to his being hired to conduct the City Opera's orchestra full-time. In 1969 Maestro La Selva joined the faculty of the Juilliard School where—until 2010—he taught much sought-after conducting classes and opera workshops. For many years, until their demolition, Maestro La Selva gave private lessons at the legendary Carnegie Hall Studios.

A mass of Chiristian Burial will be offered on Tuesday October 17 at 10AM at Saint Patrick’s Cathedral on 5th Avenue in New York City.  Visitation will be on Monday at the Hugh M. Moriarty Funeral Home, 76 Park Street Montclair, NJ from 4-8 PM.  Interment Mount Hebron Cemetery, Upper Montclair.

In 1995 the President of Italy knighted Mr. La Selva as a “Cavaliere” in the Order of Merit of the Italian Republic for his distinguished service to Italian music. Mr. La Selva’s contribution to the cultural life of New York was commended by President Bill Clinton, New York Governor George E. Pataki, and former New York Mayor Rudolph Giuliani, an avid opera lover, who awarded La Selva the coveted Handel Medallion, New York City’s highest distinction for achievement in culture and the arts.

To send flowers to the family or plant a tree in memory of Vincent La Selva, please visit Tribute Store
Monday
16
October

Share Your Memory of
Vincent
Upload Your Memory View All Memories
Be the first to upload a memory!
Share A Memory
Send Flowers
Plant a Tree