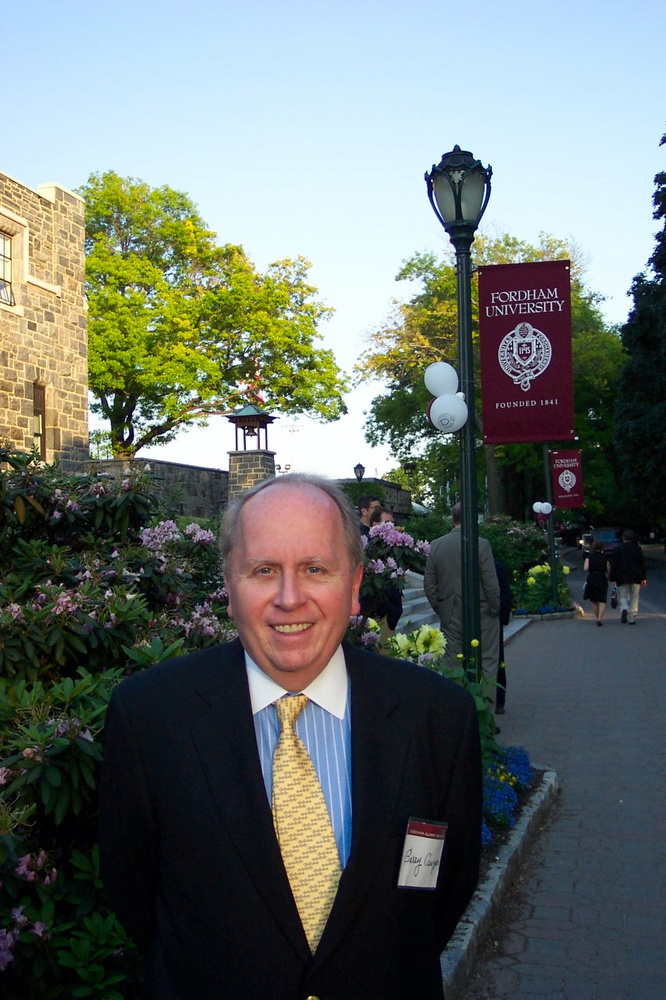 Please share a memory of George to include in a keepsake book for family and friends.
View Tribute Book

Attorney, journalist, devoted husband, brother and friend George "Gerry" Campion died Nov. 14  in the company of loved ones  at his home in Hoboken, N.J. He was 75.

As a reporter and lawyer, Gerry seized every opportunity to champion intellectual inquiry, social justice and the separation of right from wrong.

The youngest of four, Gerry was born on March 8, 1947 in Jersey City to Thomas F. Campion, Sr. and Genevieve Schantz Campion. He spent his early years in Nutley, Maplewood and Newark prior to settling in Springfield.

From there, the teenaged Gerry boarded a train each morning for the hour-long journey to Manhattan's Xavier High School.

Steeped in the written word, the Jesuit education nurtured an embrace of classic literature, Latin and philosophy that sustained Gerry throughout life.

Gerry turned to journalism upon returning from France.

His work as the lead reporter on a series exploring the decimating poverty and crime on the West Side of Asbury Park garnered a 1982 New Jersey Press Association Enterprise Reporting Award for the Asbury Park Press.

He also mentored young attorneys as a member of the New Jersey Brennan Inn of Court, named for the former New Jersey and U.S. Supreme Court Justice William Brennan.

The Brennan Inn of the Court in Gerry's memory has established the biennial George G. Campion Award to honor a young attorney who exemplifies professionalism, integrity and commitment to the high standards of the legal community.

Gerry as a friend and professional bettered many lives.

The trajectory of his own was forever altered in 2004 when, a dozen years after their meeting in the Hamptons, Gerry at last summoned the nerve to ask Stela Maria Ferraz-Alvim, also a lawyer and now a public servant, on a date.

Gerry and his Brazilian bride were married June 25, 2005.

No longer Gerry, he became "Gerry, My Love."

And for 17 years shared a love of fine food, wine, art, travel and - above all - one another.

In addition to Stela and countless friends, Gerry is survived by brothers Thomas F. (Virginia) Campion, Jr. of Morristown, N.J., Robert E. (Deana) Campion of Montclair, N.J and Mary Jane Altmiller of Vienna, Va. along with nieces and nephews on both the Campion and Ferraz-Alvim sides of the family.

In lieu of flowers, Gerry's family asks that donations be made to Xavier High School:

NOTE:  Please remember to mention that the gift is in memory of Gerry Campion, class of 64

On-line Giving:
The web link is https://www.xavierhs.org/giving/annual-fund
If making a donation on-line, after clicking the Give Now box, please be sure to fill out the section of form where it asks if this gift is in memory of someone.
Click the box on form that says, "My Gift is a Tribute to Someone Special"
then in that dropdown, fill in:
"Gift in memory of"
Gerry Campion class of 64
Or to:

To send flowers to the family or plant a tree in memory of George Campion, please visit Tribute Store
Sunday
1
January

Share Your Memory of
George
Upload Your Memory View All Memories
Be the first to upload a memory!
Share A Memory
Send Flowers
Plant a Tree