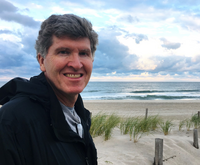 Kevin Vincent O’Leary of Montclair, NJ, died suddenly at the age of 62 on March 31, 2022. He was born on April 13, 1959 at St. Vincent’s Hospital in New York City to Denis and Audrey O’Leary of Cork, Ireland. He grew up in Scarsdale, NY, the youngest of his brothers: Michael; Brian (Mary); and Denis.

After law school, Kevin worked on Capitol Hill, and then in New Jersey government overseeing groundbreaking health insurance reform programs. Thereafter, he worked in the health care industry at Roche Pharmaceuticals, IMS Consulting Group, and most recently, Bayer HealthCare Pharmaceuticals, from which he retired in April 2021.

He was the most loved man who loved his family, friends, and his life every day.

His family will be hosting a visitation at Hugh M. Moriarty Funeral Home, 76 Park Street Montclair, NJ on Friday April 8th from 6-8 PM. A mass of Christian burial will be held Saturday, April 9th at 12:30 PM at St. Theresa of Calcutta Parish, Church of the Immaculate Conception in Montclair. In lieu of flowers, donations can be made to the Cape May Fund or to NJ Sharing Network.