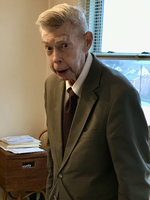 James was an avid reader and movie fan and, together with his wife of over 60 years, spent most of his time visiting the bookstores, movie theaters, museums, concert halls, and Broadway theaters of New York City.

In lieu of flowers, a contribution to a theater, dance or classical music organization may be made.