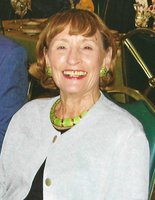 In l958 she married John J. Kapp, her husband of 62 years. While raising five children, often with a little help from her aunt, Bessie O’Connor, Anita added to her many family activities (hockey practices, summer horseback riding lessons, teaching CCD) by graduating from the New York School of Interior Design in l971. She progressed from several small residential projects to establish her own firm designing offices at several of New Jersey’s most respected law firms. Her talent and personality earned her the contract to design public and private spaces at the New Jersey Sports and Exposition Authority (The Meadowlands and Monmouth Park Racetrack), as well as corporate offices and team facilities at Madison Square Garden. Her expertise and work ethic also led to her being retained to renovate chambers at the Federal Courthouse in Newark. After happy years of hard work and success, Anita reluctantly retired, secure in the knowledge that her legacy would live on in the beautiful and efficient designs she created over the course of a long career.

Anita loved their summer home in Miller Place, Long Island, where she enjoyed many summers. Miller Place always held a special place in her heart for gatherings with family and friends.

Anita was a long-time parishioner at St. Cassian Church in Upper Montclair, NJ and is survived by husband John, their son John and his wife Linda, daughter Elizabeth Kapp, son Andrew and his wife Mary (deceased), son Joseph, son James and his wife Christina, and ten loving grand-children and five great grandchildren.

A gathering to celebrate Anita’s life will be scheduled in the near future. We will always remember Anita for her intelligence, her unquestionable style, her laugh, and most of all the devotion, concern, and encouragement she showed to all those she knew and loved.